Testing some highrez stuff in UDK, this is a first test for something I plan to do later at some point, a smaller quicker project than what im doing now ^^

Been a bit busy so haven't updated in awhile, but that will change now :D Here are some shots from the outdoor area, added a new set of walkways, tweaked the lighting etc. Have to do some proper custom props soon, but everything is moving in the right direction atleast, even though im really not happy with the lighting in the outdoor section at all : /

Been really busy at work etc, so havent had time to work much on this lately, but my awesome friend Markus Hammarstedt got these characters in the engine and walking around : D Placeholder characters and pretty early, but its really sweet!

So Far Cry 3 just got released a few days ago, big grats to the guys at Massive :D (and the other ubi people ofc!) Metacritic score of 90+, pretty awesome! Worked on this back when I was still at Massive, happy to see some of my art is still in there :D /guns and props) Might bother to dig up some screens for the folio later :)

Another cool thing that is out now is the beta of ddo :D (which everyone probably have heard of anyway...)

Supercool tool, will change alot of peoples workflows for sure! Also its almost cheating because they took my models and now they look better then when I textured them by hand... god damnit. Im a huge fan of efficient pipelines, so... hell yes, its awesome. Will be using this alot from now on :) Gonna try to do some more streaming this week aswell, and I need to recap my old baroque environment and do some straming/tutorials for that... when I have time :)
Upplagd av Unknown kl. 23:08 3 kommentarer:

Been working on expanding the environment a bit, tying together the slums, so its just not a couple of loose hallways : ) Have been pretty busy lately but should be able to do some streaming soon again : )

Some random shots from the slums of this enviro, from a couple of alleys I have been working on, still very early : ) Aswell as a quick test of my modular spaceships I will be building to cover up the skyline, starwars-style!

Recorded a small clip of some environment-animation and stuff from the level, still rebuilding stuff that was lost and deconstructing some areas to redsign, wasnt quite happy with how they turned out, anyways...its getting there, slowly.

Been kinda busy so not much work done on the scene, have done a bunch of stuff that is half-finished now, and some sutff that only looks good in motion, should record another clip of the level soon and show :) Here is the "finished" version of the doorway I was doing while i was streaming last time, and another interior shot from another location : )

I lost two weeks worth of work in my persistent level, so I have been redoing alot of stuff lately, not everything is rebuilt yet though, I guess I will do backups more often now... Here is some more work on the robot store, more assets, more placeholder, etc :D

Computers are placeholders, so are the lamp-things and parts of the ceiling.

This will be a robot-store in the scene, did some work on the walls etc, its coming along quite nicely, but the grain is killer right now, and I need to make lots of custom assets aswell, not just modular ones :)

Started doing some interior props for stores aswell, like these modular benches/tables : ) Just a quickie, but a decent start. Some of the interior props will have their own textures, atleast ^^

Went and recorded a small clip from the level, showing off some of the movement and the kind of feel im going for with the atmosphere, still got a loong way to go. Big props to my awesome friend markus hammarstedt who has rigged the robot, and will be doing le animations aswell : D

Started working on some mid-range props for the rooftops, aswell as added stuff like fake traffic for the background etc, starting to come together in some places now, if you dont look to closely ^^

Been doing some more work on the scene, but those areas still looks kinda off, so here are a couple of random shots. Going through the level and doing touchups here and there, trying to keep the productivity up : )

Been working on some building modules for the scene, aswell as various small tweaks, cleaning up stuff more and more. This particular area is starting to look pretty decent now. From the right angle, if you squint a bit :D

Huge vents of the future

Making some more props! Starting to get the feel of the scene more and more as it goes from placeholders and noise to a bit more structured layout : )

Added some new props to the scene, aswell as making a cleanup-pass for it, and doing some various fixes here and there. Finally becoming friends with the texture and shader and starting to get some good stuff out of it : )

I posted a thread for my new environment over at polycount: http://www.polycount.com/forum/showthread.php?t=107672

Been a bit busy so havent made anything fancy, but I made a bunch of new props for the scene aswell as just randomly iterating on parts here and there, it has a long way to go in terms of composition/lighting and layout... ^^

Finally made some new renders of that old mech I never really rendered properly and put in my folio, here they are : D

Cleaned up the first character concept and did another one, the one on the left is..some kind of mechanic, and the one on the right a pilot or something similar ^^ 2d is tricky! Gonna do some livestreaming of building that vehicle I concepted later today.

I've been doing some concept art practise the last two days to get my concept skills good enough to be relevant ^^ Sofar i concepted up a vehicle and a character im still working on : ) Both are for the same environment as the ballbot and the asphalt shader :) More to come soon : ]

Ah, here are some quick modelviewer shots from UDK of the robot with the basic bake and temporary shader on it! : ) Next: texturing! Cant wait to see it moving, woo : D

I have been grinding away on my new scene this weekend together with my friend Markus, who has made the rig for this little robot ^^ Pretty meh render, but i'll post some pics once he is ingame in UDK instead, didnt have time to setup materials and stuff for a proper highpoly render :)

Went pretty fast to build, I was trying out some new modelling methods and they seemed to hold up pretty well : D Trying to switch over more and more to modos weighting tools for sub-d modelling, even though they only work in certain cases :) 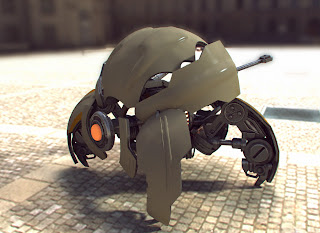 I did some livestreaming today, some modo modelling aswell as flying around a bit in UDK in my latest scene : ) You can see the video here:

So I spent some time today making new textures and a new shader for a scene Im doing, I figured I'd reuse an older shader I made a year ago or so, but when I opened it I had to travel back in time to slap myself : D Spiderweb spiderweb! Nodes on top of eachother, stuff that was connected that didnt even work + it was really expensive :D 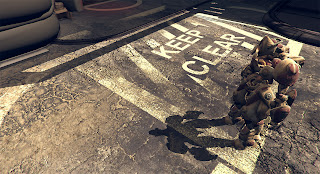 This is how the old shader looked when I opened it : D 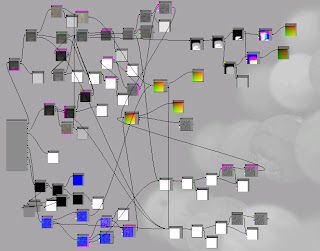 Figured I would start a blog as a way to keep track of some of the art I post here and there, since it might be difficult to keep track of, we'll see if its a good idea or not! I'll probably post random thought and tricks about 3d aswell here : ) For now, lets test with a WIP of my latest project. : ))